26 November16
AlhamdoLillah this year, Imam Hussein (AS) invited me to visit his holy shrine during Arbaeen 2016. More than 20 Millions of Muslims from across the world have gathered in Iraq’s holy city of Karbala to commemorate Arba’een, the 40th day after Ashura (the martyrdom anniversary of Imam Hussein (AS), the third Shia Imam).
These are some photos I've taken during walking towards Karbala (except the first photo and some of the last photos). Photos are taken from My other blog hosted on Blogger (Shia Muslim blog) and may be filtered in Iran and some other countries! 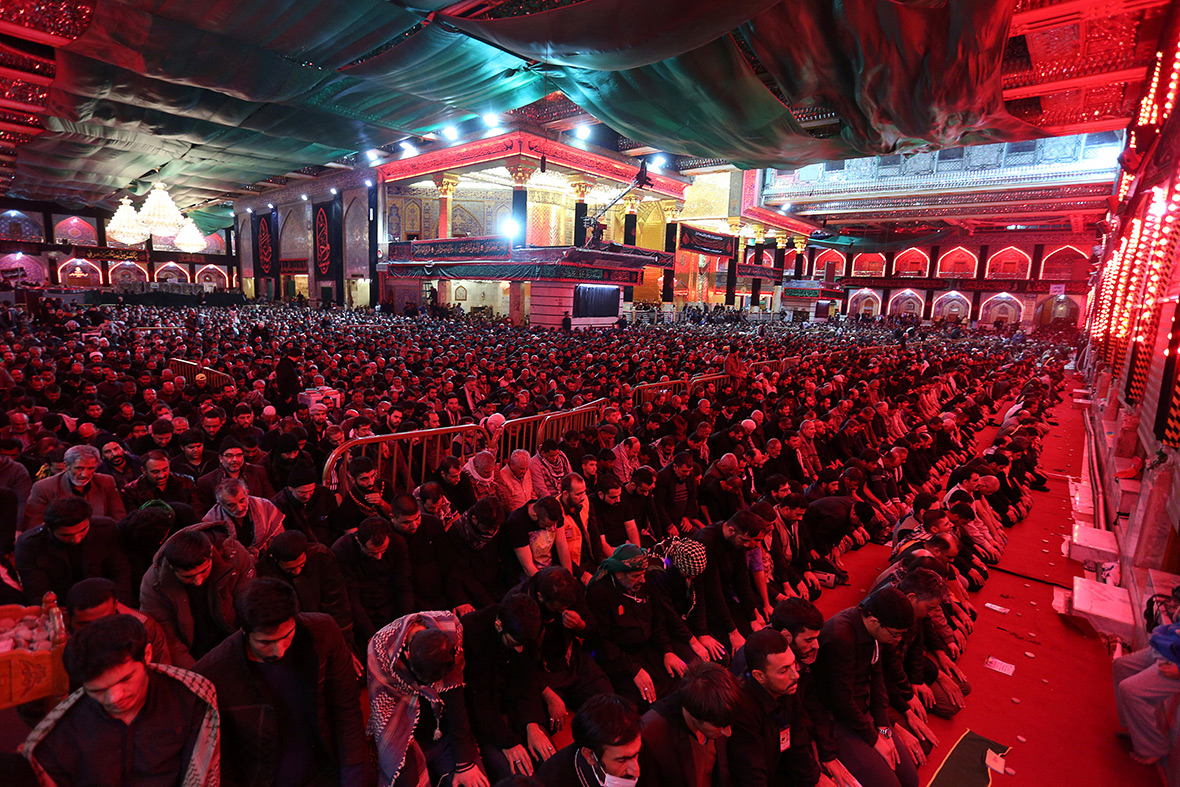 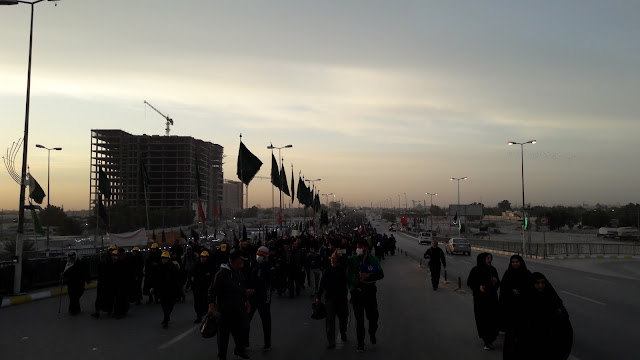 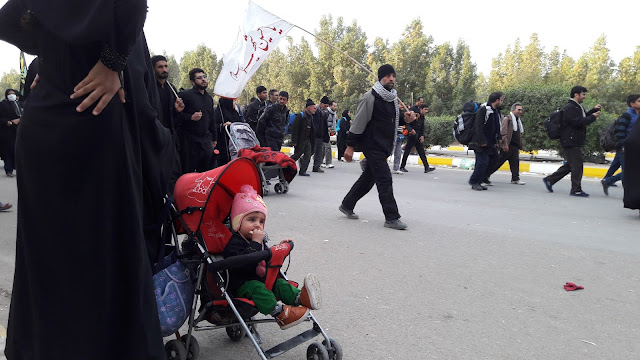 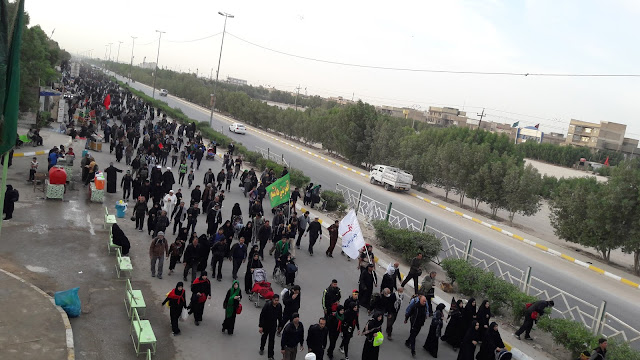 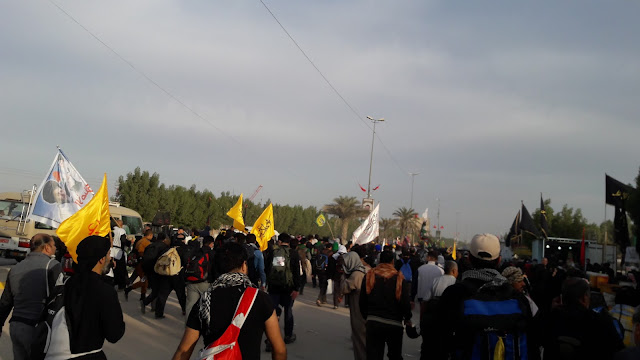 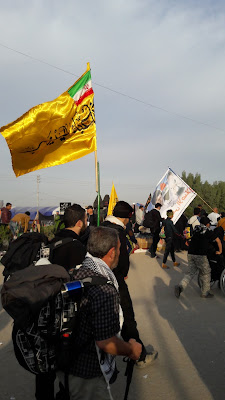 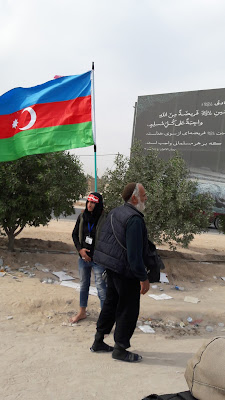 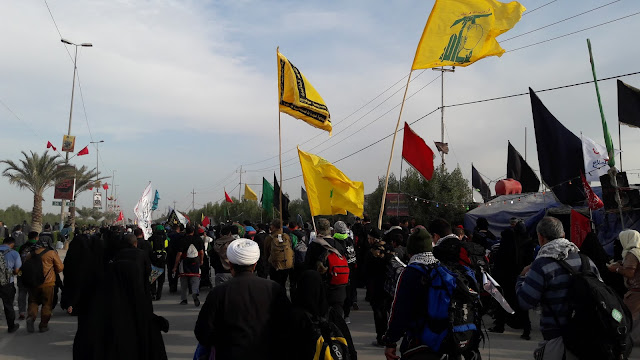 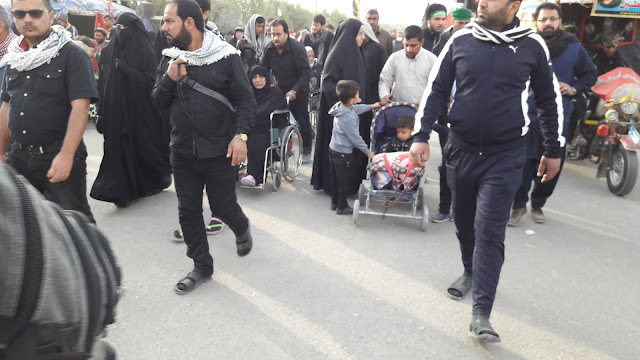 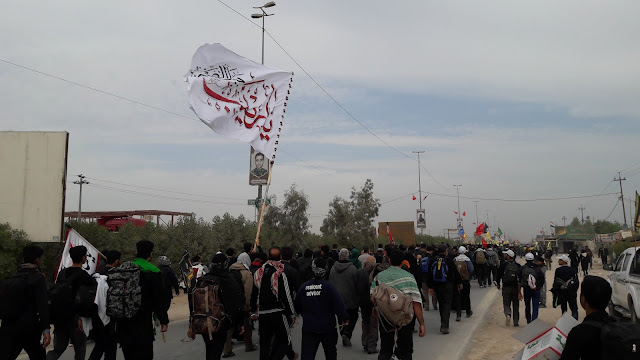 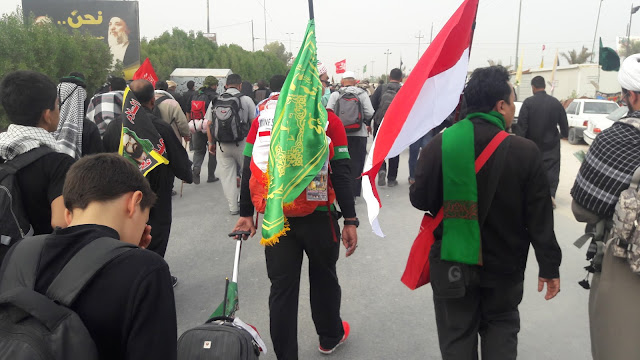 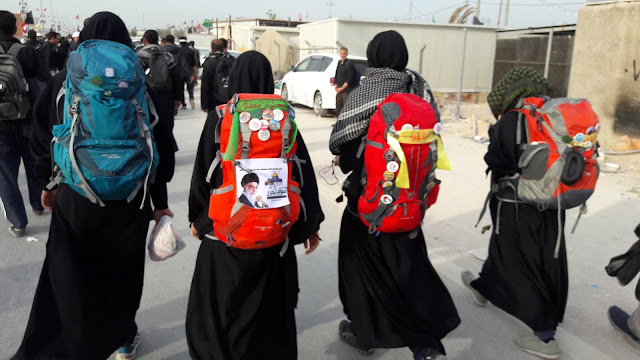 Arbaeen 2016 - The Largest Peaceful Gathering in the World is Underway

About 12 days left until Arbaeen 2016; but pilgrims just started their spiritual journey towards Imam Hussein (AS)... Lots of people from Iran, Afghanistan, Kuwait, Pakistan, India, Lebanon, Syria, Iraq, Yemen, Bahrain and Western countries began their walking from around 10 days before. They want to experience the best travel of the world. A travel on foot towards the heart of the earth, Karbala; where the holy shrine of Imam Hussein (AS) is.
Last year more than 26 million pilgrims walked towards Karbala to take part in the mourning rituals of Arba’een in Iraq (4 December 2015). (Ref: Arbaeen 2015 Gathering)

This year, hopefully I am one of the millions of Pilgrims of Imam Hussein (AS) InshaAllah.

Aerial Photo from Karbala During Arbaeen 2015

Arbaeen is the 40th day after Ashura in which Imam Hussein (as) and his companions martyred. In Arbaein, due to some historical documents, Imam Sajjad (AS), Seyeda Zeinab (the sister of Imam Hussein), and some other relatives of the Imam, came back to Karbala and mourned for Imam and other martyrs of the battle of Ashura.
After Saddam, walking to Karbala was released. Since then, every year, millions of Shia Muslims from all over the world travel to Karbala, the holy city of Iraq, to commemorate the religious ceremony of Arbaeen.
The walk from Najaf to Karbala is one of the most enlightening acts of worship a pilgrim can perform. The suffering and hardship imposed on the family of Imam Hussain (as) and the grandchildren of Prophet Muhammad (s) is felt in every step, and thus the love and respect for this holy family increases in the heart of the believer with every step that is taken towards the holy land of Karbala.

In the name of Allah, the Entirely Merciful, the Especially Merciful

Like your body your mind also gets tired so refresh it by wise sayings. Imam Ali (AS)

Every Muslim like to get more familiar with the culture of the Prophet Muhammad (SAWA) and his Ahle-Beyt (AS). However, our modern living doesn't allow every one to have regular religious readings. Today we are more accustomed to the digital world, and prefer to sit behind our PC or tablet and read the concise digital documents instead of large and heavy paper books.

Bayyenat is a wallpaper manager software, developed for the windows OS in order to expand the religious knowledge. In Bayyenat, every wallpaper is decorated with a Hadith (saying) from the Prophet Muhammad (SAWA) or one of his successors (Caliphs). You can set a path for wallpapers and another path for the narrations text file and Bayyenat will merge the two and produce an interesting wallpaper. You can set the program to change the wallpaper in specified intervals. Moreover you can change several attributes of the Hadith and its English translation, like: font, color, shadow, position in the desktop and its background. Finally you may select the Arabic text to be shown or not; to this end, set the Arabic font size to 0. The same can happened for English text.

The current release of the Bayyenat contains about 3200 narrations from the Prophet Muhammad (SAWA). These Hadiths are taken from the Nahj-ol-Fasaha book. In the near future, several verses from Qoran and various hadiths from other sources such as Nahj-ol-Balagha and other important books of Shia and Sunni like Osule-Kafi and Vasael-Alshia of Shia and Sahihe-Bukhari and Sahihe-Muslim of Sunni will be added.

Please let me benefit from your valuable comments. To contact me, use the comments of this page or send your email to hossein41 {at} GMAIL {dot} com

Some pictures of the Bayyenat and its output images 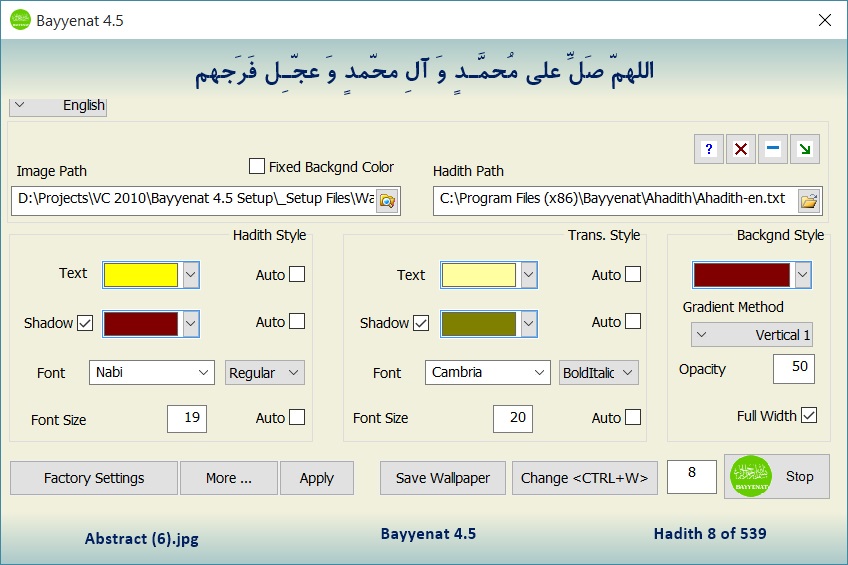 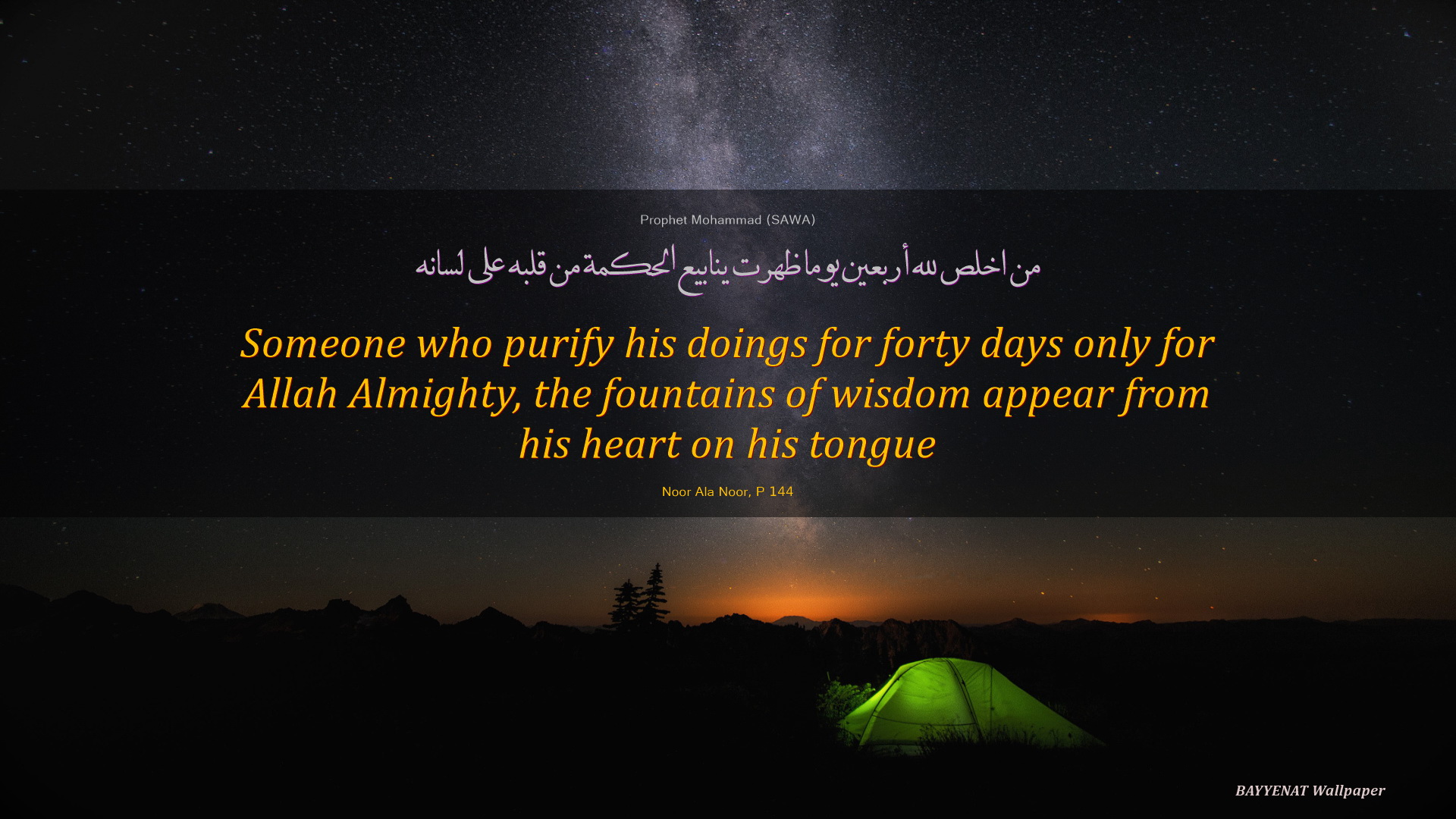 8 October16
Every year, at the first Friday of Muharram, Shia Muslims commemorate the Global day of Ali Asghar (AS). Yesterday was the first Friday of Muharram and Iranian Shia as well as other Shia throughout the world, marked this international day.
Abdullah Ali al-Asghar ibn Husayn or simply Ali Asghar (d. 10 Muharram 61 AH (10 October 680 CE)) was the youngest child of Imam Hussein ibn Ali (grandson of the Islamic prophet Muhammad and the third Shia Imam) and Rubab (daughter of the chief of the Kinda Imra al-Qays tribe). The six month old Ali Asghar was killed during the Battle of Karbala and is commemorated in Shia as the "personified quintessence of the innocent victim".
The following are some photos from the Global day of Ali Asghar in Iran during Muharram 2016. Salaam upon Imam Hussain (AS) the greatest man of sacrifice and martyrdom. 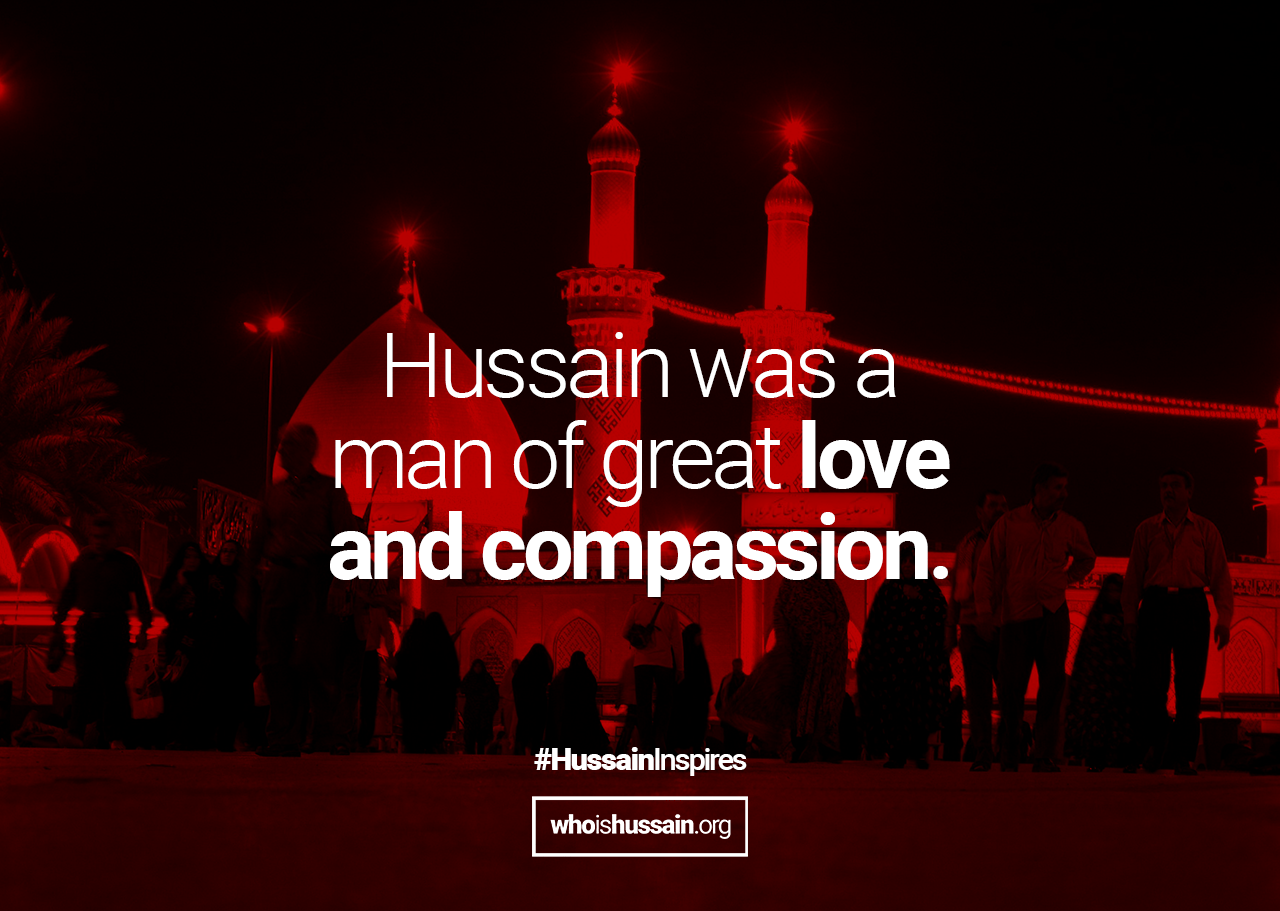 Why Shia Are Muslims?

I was searching web for the phrase "Shia Islam" and unexpectedly I found an image saying Shias are not Muslims!!

It was in a website from DAESH (ISIS) that are roots of terror in the world and destroyed the human face of Islam. DAESH people are Wahhabis, the followers of Bani Ummayyah who killed Imam Hussein (as), grand son of the Prophet Muhammad (sawa) and master of the youth of Heaven.

Now these wild and ugly-face people say that Shia are Kafir! So funny.

Shia believes in Allah and prophecy of Muhammad (sawa). They also believe in the day of Judgement. They pray towards Kaba and have the same Quran as other Muslims. So they are Muslims. Furthermore there are a lot of documents in Sunni books which say Shia are right. If you read historical books and some correspondence between scholars of Shia and Sunni, e.g. AlMurajiat or Nights of Pishavar you will simply find the truth. ValiAsr website has a lot of proof for Shia from Sunni sources.

Tabarani, a Sunni scholar says in his book Mujam AlOsat that prophet said: O Ali, you and your Shias are in the Heaven.

Previously in this blog, five simple proofs for Shia are provided (+) Also one of several Quranic reasons for Shia Islam is provided here: Shia Proof from Quran. Moreover hundreds of proofs can be found searching the web for the words Proof of Shia Islam or Why Shia is True... 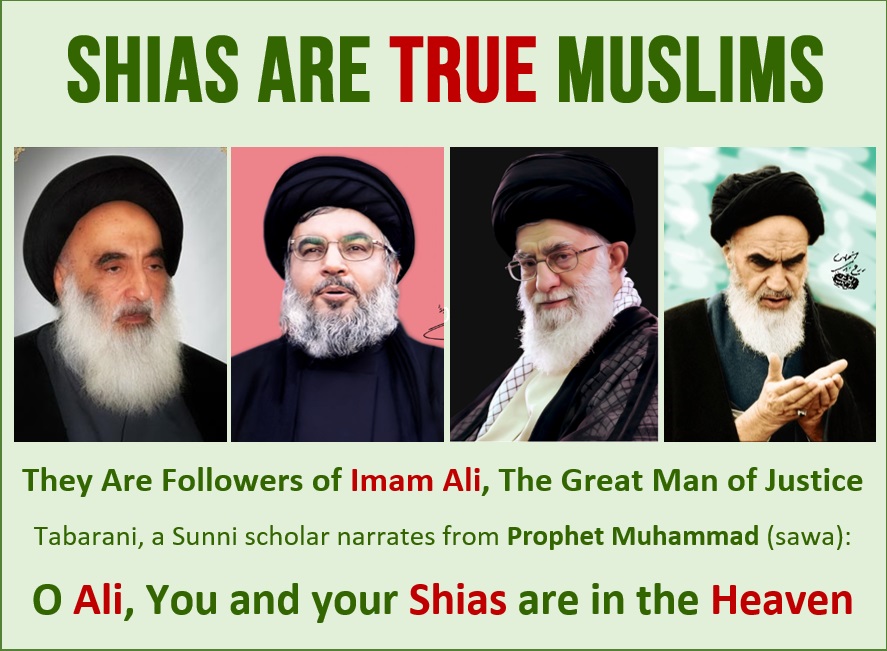 Why Shia is True Islam?

Dear Muslims or Non Muslims who are trying to find the truth about Islam, PLEASE research before decision. READ Islamic books like Quran, Nahjulbalagha and Historical books directly not from unknown weblogs or unreliable sites. Moreover, note that Shia countries like Iran never started a war against other countries, and never conducted terrorist attacks against peaceful people. Note that all terrorist groups currently active in the world of Islam like DAESH, ALSHABA, ALQIDA, ALNUSRA, ... are Sunni extremist or Wahhabis not Shia. Open your eyes and be careful. Western media want to corrupt the face of Islam, so they create, grow and support terrorist groups within Muslims and they never say good news about Shia Muslims so that the axis of resistance against arrogance and Israel be weakened.

Hadith of Prophet about Sudden Death

Prophet Muhammad (sawa):
Five matters result when (another) five things happen: If people break their covenant (with Allaah), He’ll appoint (or send) their enemies against them; if they judge by other than what Allaah has revealed, poverty will be spread among them; If Faahishah (unmarried relationships) is manifest among them, sudden death will be spread among them; If they become deceptive in trade, He will deprive them of crops and they’ll be struck with famine; And if they withhold the payment of Zakah, they will be struck with drought. 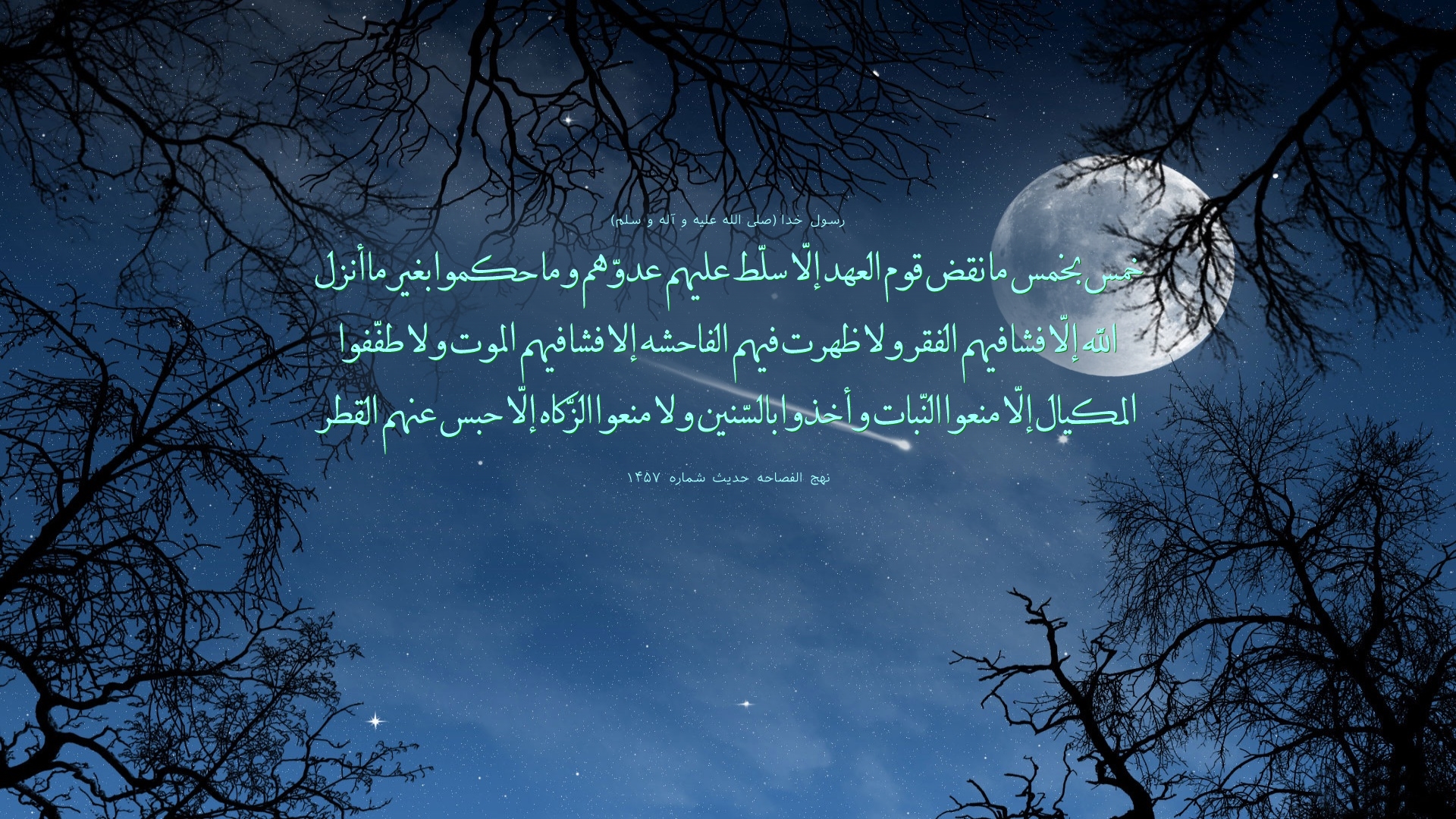 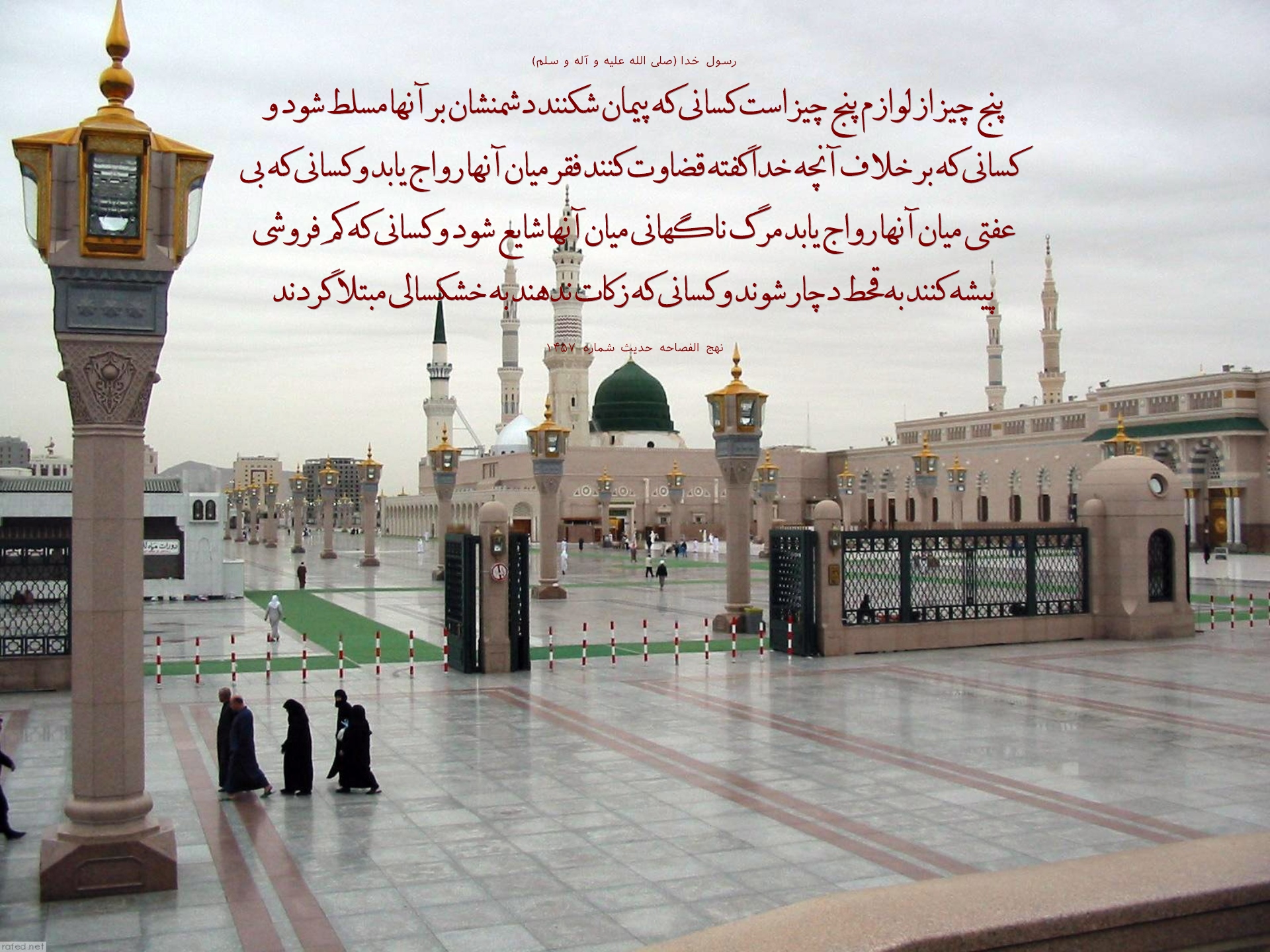 9 January16
Sami Yusuf, Islamic singer, releases his haunting new debut single “Inna Fil Jannati” from his new album Barakah (scheduled for release 01 Feb 2016). This beautiful traditional Islamic piece and poem is about the love for the Ahl al-Bayt (or household of the Prophet [pbuh]).  In a narration (Bihar AlAnvar, V 44, P 194) from the prophet, its said that this poem is narrated by Gabriel for Imam Hassan (as) and Imam Hussein (as), sons of Fatiam (sa) while they were in cradle.
Surely, a river of milk flows in heaven For the sake of Ali, Hussein, and Hassan Whosoever loves them Enters Paradise without sadness Love of #AhlulBeyt (prophets family) is obligatory to us And with this love we do not fear tribulations
إن فی الجنّة نهرً من لبن
لعلیٍّ و حسینٍ و حسن
کلُّ من کان مُحبً لهمُ(و)
یَدخُل الجنّةَ من غیرِ حزن
حبُّ اهلِ البیتِ فرضٌ عندنـا
وبهذا الحبِّ لا نَـخشی المِحَنْ

Who are right? Sunni or Shia - Imamat in Quran

Is there a Quranic reason to prove that Shiite (Shia) is the true sect of Islam or Sunni?

Of-course! there are several verses in Quran which can be used to prove Shia are right or Sunnah (Sunni).
The main difference between Shia and Sunni is the subject of Imamat; Shia says Imam is chosen by Allah and He must say to his prophet who is the Imam after him. They say that the prophet Muhammad assigned Ali (as) as his Imam. On the other hand Sunni brothers say that Imam must be chosen by a council and Abubakr is the Imam after the prophet. Here I prove that Imam must be chosen by Allah not a council. 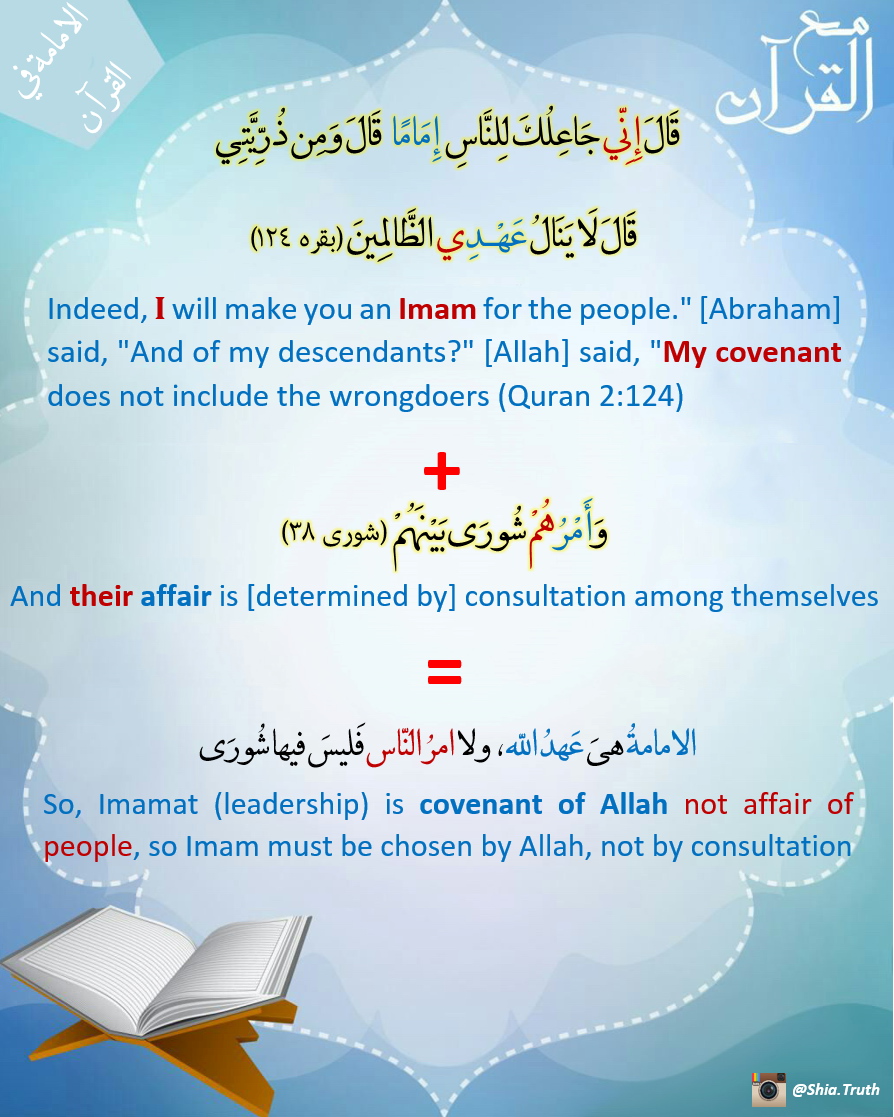 Quran says :
.
Indeed, I will make you an Imam for the people." [Abraham] said, "And of my descendants?" [Allah] said, "My covenant does not include the wrongdoers (Quran 2:124)
.
In another place, in Shora chapter, Quran says:
And their affair is [determined by] consultation among themselves (Quran 42:38)
.
Sunni Muslims use this last verse and claim that Imamat is an affair of Muslims and they must select an Imam by consultation. However the first verse says that Imamat is not an affair of people, its an affair and covenant of Allah and He must assign the Imam.

So, Imamat (leadership) is covenant of Allah not affair of people, and Imam must be chosen by Allah, not by consultation .